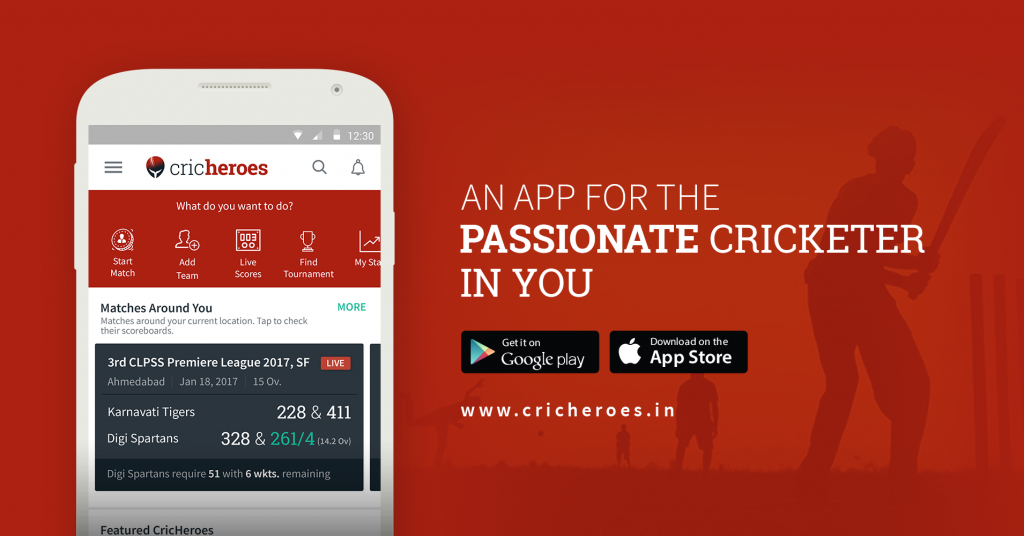 CricHeroes is an Ahmedabad based startup which build a scoring and broadcasting platform for local cricket. Founded by Abhishek Desai and Meet Shah in 2014, CricHeroes define themselves as not only a scoring platform, but also as a “Cricket Network”.

The basic idea of CricHeroes is to provide amateur cricketers a feel of the professional game by allowing them to follow local cricket matches played around them in the same way as an international match.  The application currently provides features like ball-to-ball scoring, live scores, Tournaments, CricInsights, Cricket Associations, Cricket Feed, CricHeroes Market, Looking For, Premium features and Ecosystem.

While speaking to co-Founder Abhishek Desai, he revealed that he realised that a major problem in amateur level cricket was scoring. A survey in Ahmedabad revealed to him that around 70 per cent of matches were scored on paper and not stored digitally. This incubated the idea of digitally scoring and storing scoring data which later provides insights to the players on their game.

With a dedicated team of 25 people, which includes ten engineers, two designers and a passionate sales team, CricHeroes has gone on to score and record over 3 lakh matches, 24 thousand tournaments and has over 33 lakhs registered players.

Speaking on the future, CricHeroes aims to break the 100,000 barrier for tournaments, and 10 million registered users by the start of the next cricket season in India.

Apart from India, CricHeroes is also being used in 15 foreign countries including upcoming cricketing nations like the United Arab Emirates, the United States, Saudi Arabia and established cricketing countries like Pakistan.

With the good work, CricHeroes soon started to get recognition among the start-up community. In 2018, the Government of Gujarat recognised CricHeroes as the best Start-up and Abhishek Desai as the Best Start-up Entrepreneur. CricHeroes also went on to win the 2018 India Game Changers Champions at the KPMG Sports Analytics Conference in Mumbai.