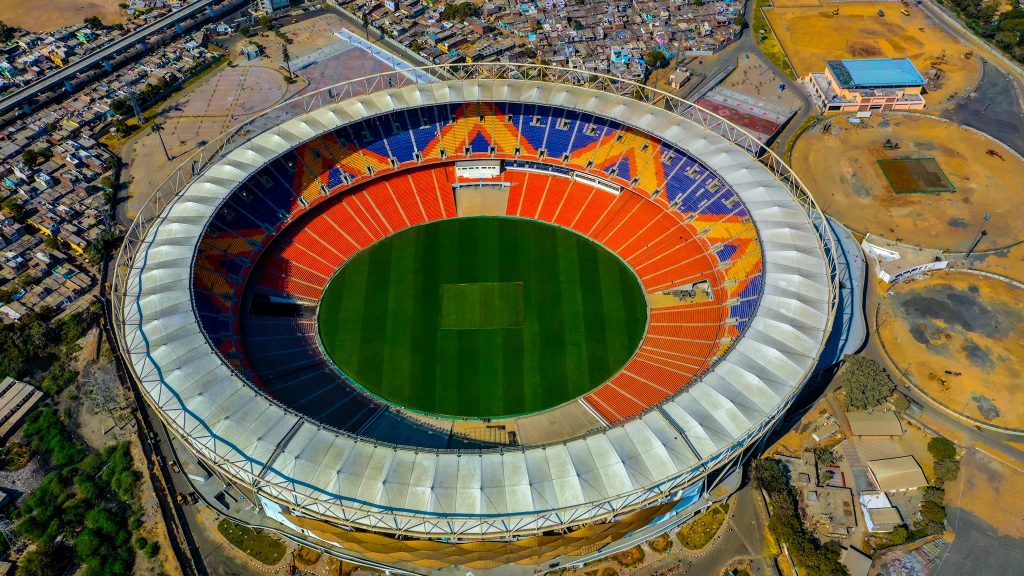 Gujarat Cricket Association, initiated the re-construction of the Motera Stadium to upgrade it to a 1.1 Lakh capacity venue in 2015. After the demolition of the previous structure (capacity 49,000 spectators) in October 2015, GCA issued a request for tender on January 1, 2016 in Times of India and Indian Express. Nine Bidders showed interest and purchased the Tender Document and only three were successful in submitting the Technical and Financial Bids on time. They were Shapoorji Pallonji Group, Nagarjuna Construction Company and Larsen & Turbo.

As the bidders presented their designs, models, and technical details of their concepts & designs, because of the sheer size and complexity of the project, the bidders were evaluated on multiple parameters like efficiency, resources, time frame of completion, ease of implementation etc.

The successful evaluation was conducted by a Technical Tender Committee (TCC) of nine experts which was formed by the Gujarat Cricket Association along with the appointment of STUP Consultants as the Project Management Consultants. The bidders were ranked and weighted on all parameters before awarding the contract. The bids were as follows

Post almost a year of evaluation, L&T was declared as the Principal Contractor to design and build the stadium. It began the re-construction work in December 2016 with an estimated time to complete of 2 years.

As the redesigned stadium occupies 63 acres of the allotted 100 acre land, it added an additional 2 entry points compared to the earlier single entry point with a metro line to one of its entry points. Some of the other new features of this earthquake resistant structure are as follows

The Buildings and Factories vertical of L&T Construction, it collaborated with several other associates to accomplish this project. The principal design of the stadium was undertaken in collaboration with POPULOUS who takes immense pride in accomplishing this challenging task. Their Innovation – Every one of the 110,000 seats has uninterrupted sightline of the field and pitch with a deliberate round, open stadium, providing 360-degree view. Their design has also ensured that the stadium seating is split into 2 major equal sections which is handy not only to host a full cricket match but also small or medium scale events as and when required.

WALTER P MOORE has served as the structural engineer and connection designer for the roof of the stadium. The city of Ahmedabad is located in a level 3 seismic zone. Due to this volatility it was imperative the roof design be lightweight and seismically separate from the bowl to avoid compromising the roof in times of movement. Therefore, the roof was specifically designed to be lightweight and separate from the seating bowls in order to make it fairly earthquake resistant. The surface of the roof is an anti-bacterial, fireproof canopy with PTFE membrane that covers 30 out of 55 metres width of sitting area.

LUBI SOLAR has to provided solar panels. It has also fixed them and commissioned the rooftop solar power plant so that power utilization is a sustainable affair at all levels.

Finally, after four fruitful years, the stadium was built and ready to use. The first event that took place was hosting of the US President Trump by our Honourable Prime Minister Shri Narendra Modi in February 2020 – ‘Kem Cho Trump’

We can’t agree any less to Mr. Subrahmanyan’s words. The only question now is, when will we see the first ball being bowled in this majestic arena and hear the voices of 1.1L spectators cheering their favorite team as they get to perform post this pandemic COVID-19.