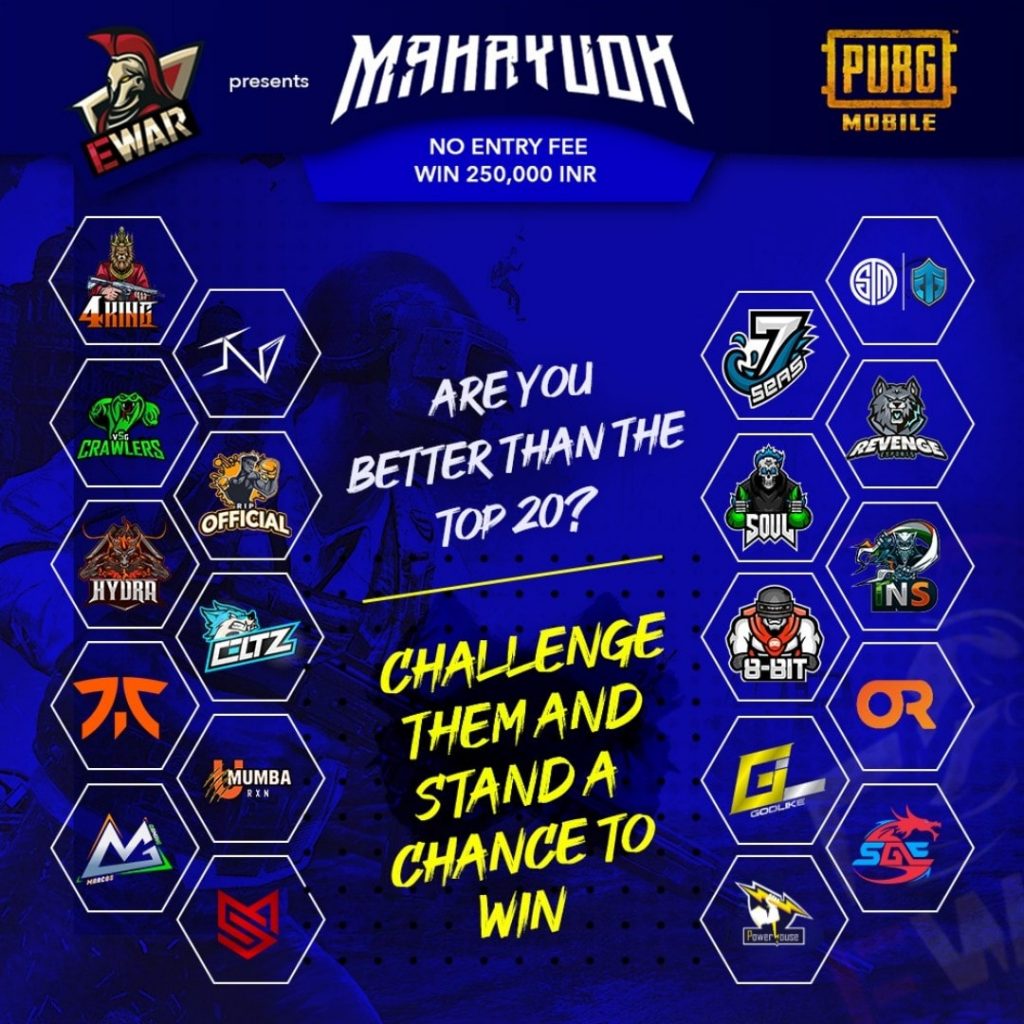 The twist is in the final stages, and Novice PUBG squads will battle head-on with the household names. Never Before has any Tournament be it  PUBG or any Game Innovated the tournament structure itself. Then again, There is nothing fiercer than an Underdog going up against the Top Teams. The prize pool for the Tournament is ₹ 2.5 lakhs.

Mr. Parth Chadha, Founder & CEO Ewar Games briefed about the launch” It gives us great pleasure to host a quintessential Esports tournament like EWar PUBG Mahayudh,
which will attempt to provide a massive platform for budding, less-known PUBG gamers in the country to compete and prove their mettle against some of the top-notch PUBG squads. Both in terms of the kind of participants and the reward pool, EWar PUBG Mahayudh’s stands out as the biggest and unmissable opportunity for PUBG enthusiasts. We are looking forward to an action-packed, fiercely competitive show over the next one-month or so. In the future, we have plans to come up with many more editions of the Mahayudh and similar flagship Esports challenges and tournaments across different formats.”

The Tournament has three phases. First Phase (18th June to 21st June), the top 20 ‘pro’ teams battle four days to secure the top 10 spots. The second phase (22nd June to 15th July) witness numerous ‘underdog’ teams fight it out for the top 10 spots, spread over 25 days encompassing four stages. The Finale features the ultimate battle  Pro. Vs. Underdog, the top 20  best-performing teams(10 teams from phase 1 and phase 2), will compete against each other, and the Champion will be the one who has claimed victory over both Pros and Underdog Squads.

The Prize Pool is doled out in phases too, Top 5 winners (rankers), and 1 top fragger squad from each Phase would be walking away with sure-shot cash prizes.

The Ewar PUBG mobile Mahayudh Season 1 will be streamed exclusively on Ewar’s mobile app. The registrations for the ‘underdog’ teams are currently underway with zero entry-fee for participants. One can register on the Ewar Mobile App and create a new team for their Squad or join through an Invite Code. PUBG Mobile gamers number more than 50 million, and PUBG has emerged as the most loved battle royale game in our country. Soul Mortal of Team Soul has 5 Mn Youtube Subscribers, Dynamo of Hydra Official has 7.6Mn subscribers on the same channel are at the forefront of PUBG Audiences. As per a recent report, PUBG tournaments accounts for almost 40% of the total Esports prize money in India(2019). It has helped passionate gamers, esports companies, brands, and audiences build a massive community around PUBG.