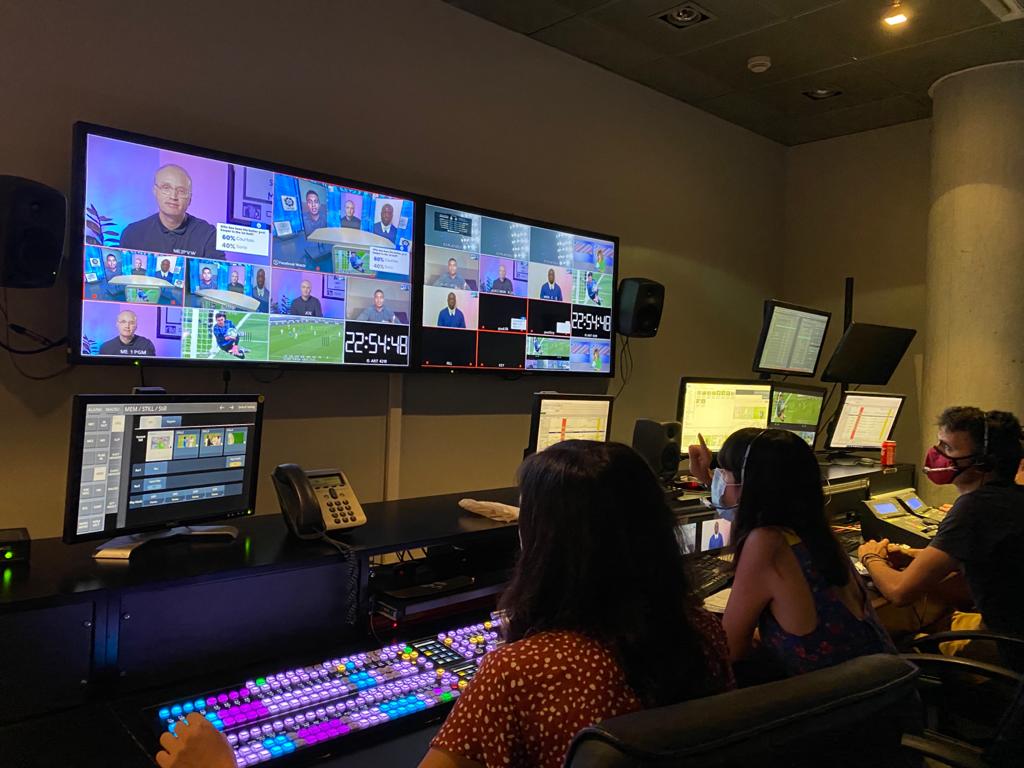 LaLiga along with its partner MEDIAPRO has revolutionized its production workflow to master remote production techniques owing to the situation caused by the pandemic. Given the security and mobility restrictions and the impossibility for both presenters and the show’s other pundits traveling to Barcelona, the program had to reinvent itself through a group video call, mixing the three signals and creating a new program signal.

This technical challenge involves a circuit that begins in Dubai and travels to England and Germany, where presenter Joe Morrison and the two collaborating pundits meet, before traveling to Barcelona where the program signal is produced. It is then sent to the Facebook servers in Los Angeles, where the signal is finally distributed to all the countries on the Indian subcontinent so fans can enjoy the show and all LaLiga matches via Facebook Watch. The full journey spans 30,000 kilometers.

The LaLiga show on Facebook Watch is produced by MEDIAPRO for the entire Indian subcontinent, which includes pre and post-match analysis of the LaLiga match week from an interactive set located in Barcelona. This program has revolutionized the way of interacting with fans through polls and comments in real-time.

Jose Antonio Cachaza, Managing Director, LaLiga India said, “We are pleased with our engagement with MEDIAPRO to enhance LaLiga‘s viewing experience. It is always our effort to provide our supporters with the best content and experience and this is a step in the right direction. Fans in this region are extremely passionate about the game and we are committed to fulfill their appetite for quality football content.”

Joe Morrison, Football Presenter, Facebook said, “Facebook provides LaLiga fans a medium to directly connect with the game and engage with them simultaneously along with the live screening. The digital medium is also the way of interacting with fans through polls and comments in real-time.”

Natxo Imaz, Digital Projects CTO at MEDIAPRO, said: “Football fans have evolved dramatically with time and the desire to watch quality content has compelled us to innovative techniques to provide fans and leagues with engaging yet exciting content. At Mediapro we tried to be imaginative and

creative to solve the new problems that we encountered. One of the good things in the digital world and fans is that you have many tools and fans are open to experimenting with new ways of communicating and connecting with your content.”

LaLiga Santander increased its international viewing figures by more than 48% on the first match day (Match day 28) after the competition resumed following the COVID-19 pandemic. According to international consultants Nielsen Sports and based on preliminary official viewing figures and estimates, international audiences during live games on Match day 28 showed a significant rise compared to the average from the first 27 match days of the season. In Asian countries such as India, where LaLiga is broadcast on Facebook, an increase of over 72% was detected.

MEDIAPRO Group operates a fleet of over 80 High Definition and 4K Outside Broadcast units, and produces live coverage of more than 12,000 events around the world each year. The Group is currently involved in the production of 16 national soccer competitions around the world, including top-tier leagues in Spain, France, Portugal, Italy, Greece, Turkey, Kenya, Angola, Slovenia, Serbia, Colombia, Bolivia, Mexico and Canada. MEDIAPRO Group manages the global media rights to Spain’s LaLiga Santander and also produce events for the UEFA Champions League, FIFA World Cup, FIFA Confederations Cup, the Africa Cup of Nations, FIBA events, the Euroleague and Formula 1. With 58 offices on four continents, MEDIAPRO is also one of the most important creators of content in the world, with projects for HBO, Netflix, Amazon Prime Video, Turner, DirecTV, Movistar, FOX, Viacom and Televisa.