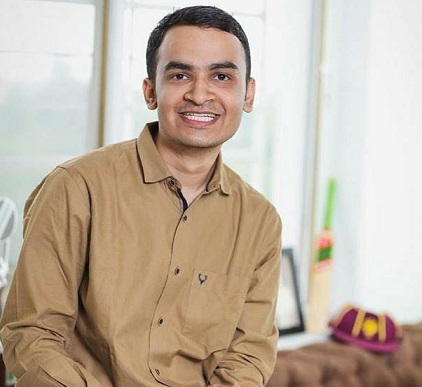 On 23rd July 2017, something exceptional took place at Lords. India played England in the finals of the Women’s Cricket World Cup. Coming very close to lifting the trophy for the very first time, the Indian women’s team made a name for themselves and received the recognition they had strived for ages. Soon, names like Smriti Mandhana, Harmanpreet Kaur were found listed along with Virat Kohli’s for sponsorships and fandom. The women in blue never looked back ever since; in other words, the team is currently listed with the best teams in the world. It was during this period that the Women’s CricZone was founded and launched by Yash Lahoti, an engineering graduate from Pune University, in 2017.  This platform extensively covered, still covers, everything that has beenhappening in the world of Women’sCricket and pursues stories that were never heard elsewhere before.  We, at Bizbehindsports, had an opportunity to talk to Mr Lahoti to know more about him and his platform, Women’s CricZone.

What motivated you to build a platform for women’s cricket?

In 2018, during a match between India and Australia, a young 11-year-old girl, just 100 meters away from the commentary box, was denied entry by the guard. On enquiry, her father confided that her request to enter the space and meet the celebrities, the former cricketers from both the teams, had been turned down by the official. Since Women’s CricZone had a decent following on Twitter, I momentarily snapped a picture and uploaded it on the platform with her father’s consent. It went viral in no time! Long story short, the commentators, sensitized by the post, came down to meet her after the match and made the girl’s day. It was then that I decided to pursue this venture seriously. And I did.

What unseen opportunities did you see that will make your platform a huge success in the future?

There hasn’t been a huge development in cricket for a long time since the IPL.  However, the ICC Women’s T20 World Cup, identified as the most-watched event after the 2019 Men’s ODI World Cup, underlined the fact that the growth of women’s cricket is going to be the next big thing in cricket. Also, the changing landscape of women’s cricket team, with a humongous rise in viewership, demanded a digital platform for quick access to news bites and a reference record for the sports lovers. The Women’s CricZone stepped in at this point to bridge the gap between the fans and their ideal icons with their instant updates. The tremendous response to the two digital issues launched, initially, spells its success. To ensure information consumption among the stakeholders, the print issue of the magazine is being distributed to varied sports organizations. This guarantees the entry of the unsung heroes from small towns into the spotlight.

How many rounds of investments have Women’s CricZone received and how much has it raised?

We have received an early round of financing from advocate Dr Chinmay Bhosale, Pune; and Ms. Reena Lahoti (Director at Amp &amp; Ohm Pvt Ltd.), Hyderabad. Further, into the journey, the company was backed by the cooperation of angel investors, Hodek Ventures, Kedar Jadhav (ProfessionalCricketer), Pravin Bhalero (former executive director at IIFL Wealth), and Indraneel Chitale (ChitaleBandhu Mithaiwales’). With such financial back up and professional support from experienced guides, Women’s CricZone is the leading media entity for growth and expansion of women’s cricket in the coming years.

What makes you think the fans are ready for online consumption of news or infotainment in women’s cricket like it is in men’s cricket?

Indian Women’s team, being one of the best teams in the world, has seen a rise in viewership it has never witnessed before in the country and around the globe. Our platform, Women’s CricZone believes in the quality of information that it provides, not the quantity; this is a fact well appreciated by our consumers. To be exact, the credit goes to the team at the helm – Ananya Upendran, ex Wisden India executive, currently, the Managing Editor leading the Editorial group and Sunandan Lele, noted senior cricket journalist with 30 years of experience in media, the Consulting Editor for the company.

What has been the most challenging part of your journey till now? And how did you overcome it?

Dealing with challenges punctuating every day of ours has been ‘the most challenging part of our journey.’ However, we gear up to dig deep, come up with innovative solutions, and move on to new pastures.

How do you see the growth of Women’s cricket panning out in the next 5 years, how different would it be from the current scenario?

One thing I believe would change in women’s cricket in the next five years is a revision of pay narrowing down the disparity that exists now between the men’s and women’s pay scales. To be realistic, it may not count equal, but the gap will narrow down for sure. And if we quote the medias’ perspective, the coverage of women’s cricket would soar high, and five years down the line, the audience would face a dilemma on whether to follow the men’s cricket match or the women’s when it is telecast parallelly. In other words, this impetus would be the result of higher game standards achieved, greater investments attracted, and wider media coverage invited by the women’s cricket team.

There is a common argument made with regards to the persisting pay gap between men and women’s cricket that it exists because men’s cricket brings more revenue.

What we have to notice is that after investing over a hundred years in men’s cricket it can bring that much amount of money. We can’t say the same in the case of women’s cricket. Even today, a boy from a two or three-tier city in our country knows who Virat Kohli is but not Mithali Raj. This is because the men’s cricket and Virat Kohli have been promoted to that extent. If we would have promoted women’s cricket in the same manner, as we did men’s cricket, things would be different today and this huge pay gap too wouldn’t be existing. If we are not able to give women’s cricket equal opportunity, it’s not a fair statement to make either.

Mr Lahoti is making a difference in the sport by telling untold stories of raw talents in the country through his platform. The first issue of the magazine was launched in Jaipur during the Women’s T20 Challenge in May 2019 which had Smriti Mandhana on its cover page. The platform is about to release the third edition of its magazine on 15 th August. According to Mr Lahoti, this lockdown has given him ample time to plan for his platform’s upcoming events. He is keen on growing his platform’s reach in a bid to achieve the goal of making his product the world’s one-stop destination for women’s cricket.