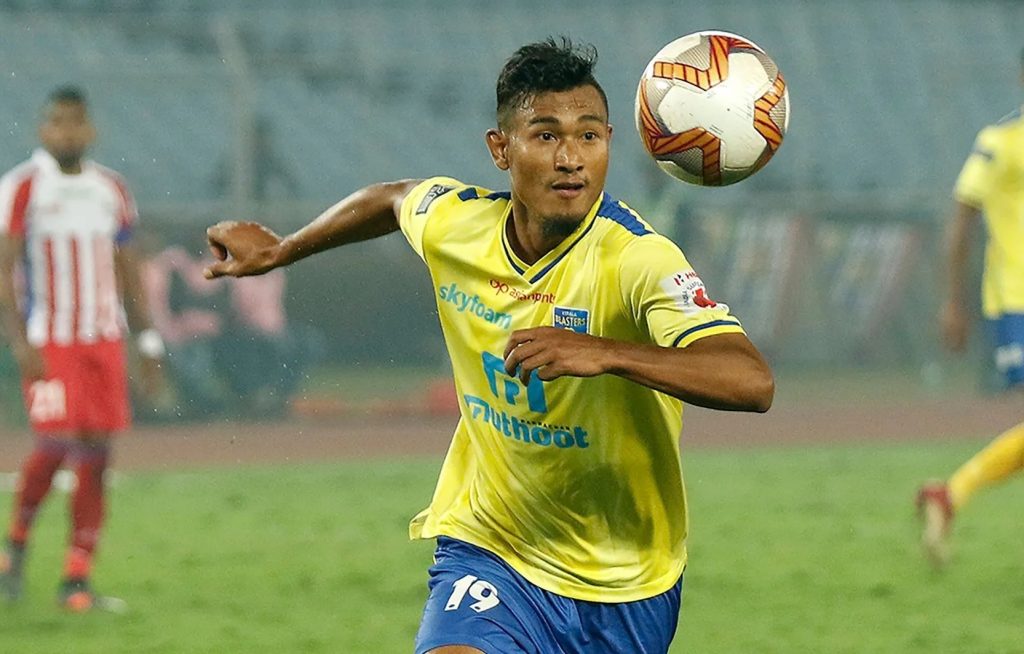 Soon after Hyderabad FC unveiled their new crest on August 12th, the fans were in for a shocking surprise when the club took to twitter to announce that they have signed Halicharan Narzary from Kerala Blasters FC for an undisclosed fee on the very next day. The left winger has penned down a 2 year deal with Albert Roca’s side which will see him don the black and yellow until 2021-22 ISL season. The 26 year who old joins Subrata Paul as the second signing of the club is a versatile player who can play anywhere in the forward line with his desired position being left wing.

Narzary, who reportedly has a market value of ₹10.42 million according to tranfermarkt.com has made a total of 59 appearances in the ISL so far. The Assamese speedster is an experienced winger who has played for numerous I-League and ISL clubs including FC Goa and Northeast United FC where he was on loan from Dempo SC between 2013 and 2016. It was with the Blasters in 2018-19 ISL season where he found his rhythm making 38 appearances for them scoring 2 goals and put 7 on the plate for his fellow teammates to score their goals.

An India international who has 26 appearances to his name said in a press release by Hyderabad FC “I am very happy to join Hyderabad FC. It’s a new team and personally an exciting challenge for me. I am eager to regroup with my new teammates soon, hopefully once the situation is better, and get down to playing football. I have known Albert Roca for some time now since his first stint in India and working with his philosophy is something that motivates me. I have loved how his teams used to play and I think these are exciting times for the club”.

Having learnt that he will team up with some of his national teammates at the club, Narzary said “I have played with quite a few of the players from the team before as well. We have a few players from the national team among us like Adil, Nikhil and Subrata, which adds to the value of our squad. The experience and the quality that they bring in together will be crucial for us this season and I hope we can leave a mark”.

Hyderabad FC played their inaugural season in 2019-20 and finished in the last position on the table. Frustrated by it, the HFC think tanks this season are hoping to turn around their fortunes by adding experienced players to their squad to boost the morale and performance of Alberto Roca’s side. Their bold strategy will be judged on how their plans pan out in the upcoming season.