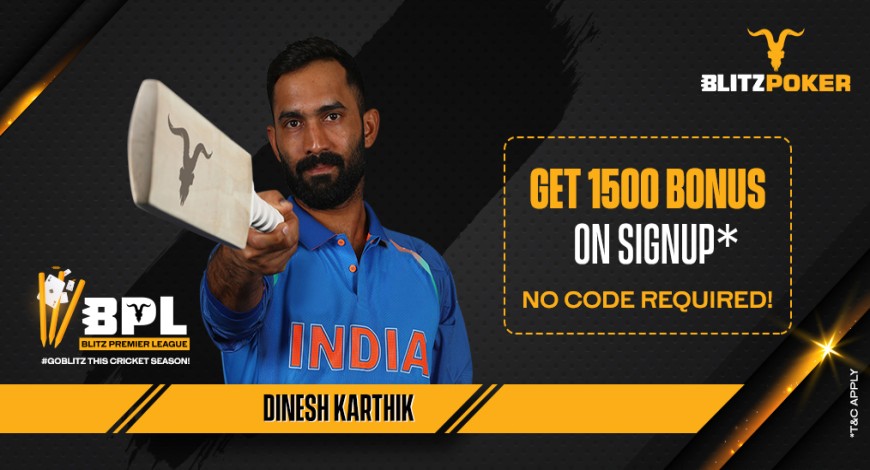 BLITZPOKER, has joined hands with renowned Indian cricketer Dinesh Karthik to launch the Blitz Premier League (BPL). Dinesh Karthik, the face of Blitz Premier League Aimed at blending the love for poker with cricket to build an unparalleled excitement among Indian fans – Blitz Premier League, an online poker tournament is starting from 21st September 2020. The 45-days long event will witness roll out of exciting tourneys and giveaways worth INR 50 Lacs for both new and existing BLITZPOKER players. Blitz Premier League is organized by BLITZPOKER to welcome new players from across India. Interestingly, online gaming is receiving an overwhelming response from tier-II cities, contrary to popular belief it is only a metropolitan phenomenon. The key driver of the market volume is the proliferation of low-cost smartphones amongst both urban and rural populations. Blitz Premier League, aka, BPL will host daily BPL Striker tournaments worth INR 75,000 prize pool. Players can participate in the tournament with a buy-in (investment) of only INR 110

Commenting on their partnership with Dinesh Karthik, internet royalty, Dan Bilzerian said, “It is absolutely thrilling to have a cricketer of Dinesh Karthik’s caliber join our ranks for this upcoming tournament. I would like to welcome him to the party and we are quite excited about this collaboration. I would also like to wish him the best for all his upcoming matches as he leads his team. Karthik personifies the hard work and dedication needed to master the game of poker.” Further commenting on the tournament, Bilzerian said, “Blitz Premier League is our way of celebrating India’s passion for cricket while also celebrating the game of skill, i.e. poker. We look forward to, once again, witnessing the passion and love for the game of poker that we’ve come to expect from the Indian poker community.”

Talking about his association with Blitz Premier League, Dinesh Karthik said, “Like cricket, poker requires a particular set of skills. These skills require a lot of dedication, hard work and practice to master. Blitz Premier League is a unique online poker tournament which will definitely excite the poker fans. My partnership with BLITZPOKER is my way of extending my support towards the game, and my respect for the players.”

All new members joining during this period will also stand to benefit from exciting offers on their first deposits. New users on the app will get a free ticket to the INR 75K GTD daily BPL Striker tournament. Participants can register for the Blitz Premier League on www.blitzpoker.com, and the format of the game will be Texas Hold’em.

· During the Blitz Premier League, new users who sign up on BLITZPOKER.COM will get a free ticket to the 75K GTD daily BPL Striker Tournament

Blitz Premier League also includes BPL Bonanza wherein players get a chance to win endless merchandise, claim amazing deposit offers and an exciting deal for all new sign-ups during this cricket season. Blitz Premier League will run every night at 8:30PM IST on the BLITZPOKER platform