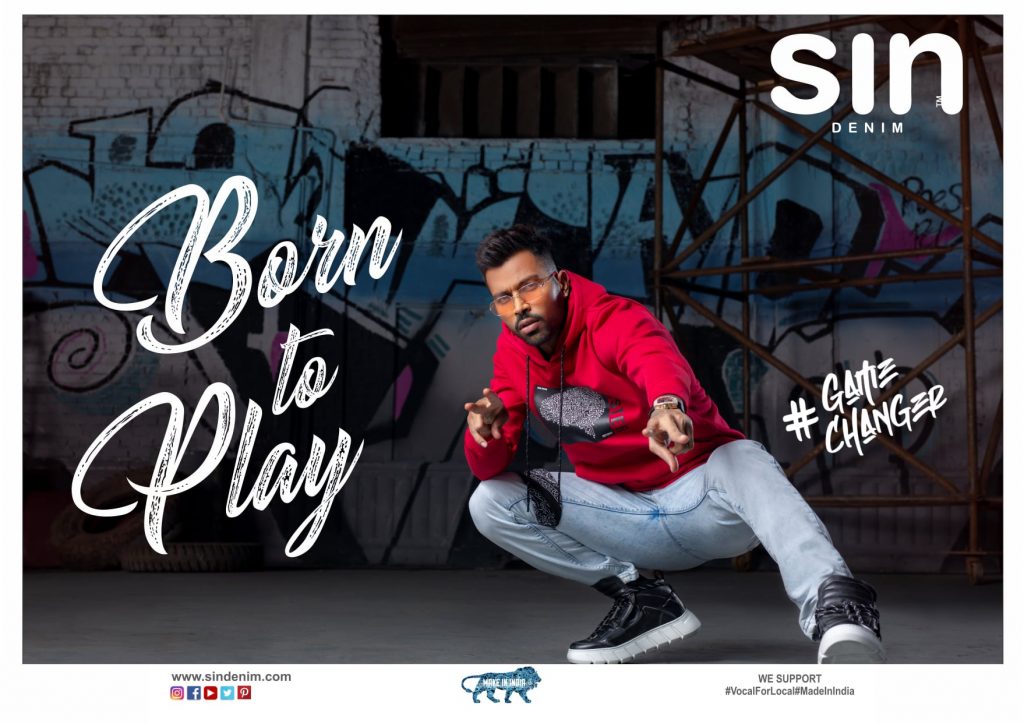 Clothing brand SIn Denim went into a partnership with a rising star of Indian Cricket, Hardik Pandya in 2018 and that partnership has been mutually successful. Hardik Pandya has gone from strength to strength as he has now become a permanent fixture in the national team. Meanwhile, Sin Denim has strengthened its brand in the clothing market.

Sin denim is a modern, trendy, funky and glamorous brand aiming to crack the shackles and pre-determined conventions of the globe and catering to the requirements and traditions of the young. Sin Denim also remains committed to expanding its innovation and durability limits, ensuring that each piece is exclusive and caters to the youth. It is conveying a new process of modern and trendy fashion through this different initiative.

Sin Denim’s new ad campaign ‘Game Changer’ starred Hardik Pandya, which was launched on September 1, 2018. The campaign brings out the young, eccentric, and ambitious youth who are ready to change the game and give society a variance. Hardik Pandya is a glamorous figure full of courage that young people look up to as a style icon, aside from being a future all-rounder in the game of cricket. From his fashion quotient to his exercise routine, what makes him the perfect option for Sin Denim’s TVC is his style and attitude. The campaign highlights how young people have grown to a point where nobody will deter them from becoming the ones that transform the world, from fulfilling their dream to violating the law.

“The season is going be a #GameChanger for us as we move ahead with the gen-next. The youth is the most important section of society, as they are the future. Only they can make a difference and emerge as the #GameChangers. With this campaign, we are creating the vision and validation of Sin denim as a brand that appeals to the new generation. On behalf of Sin Denim, we welcome Hardik Pandya as the face of our brand. As an upcoming youth icon, his commitment and drive are akin to the ideals of our brand. We are excited and looking forward to this association,” said Mrs Vijaylaxmi Poddar, Director, Clothing Culture Ltd, which owns the brand SIN Denim.

Sin Denim’s collection of items includes fashion denim, casual skirts, cotton jeans, t-shirts, sweatshirts and jackets. The brand is available in luxury chains such as Core, Reliance Patterns, Infinite, Brand Warehouse, Lulu, and others, besides being present in 1300 multi-brand outlets. The brand actively pursues the creation of its own exclusive shops. Sin Denim is well-established on the South, East, and North India market and has substantial overseas presence in Sri Lanka and the Middle East through Lulu shop-in-shops and premium chain.