Pragya Industries – the emergence of an Indian fencing equipment provider 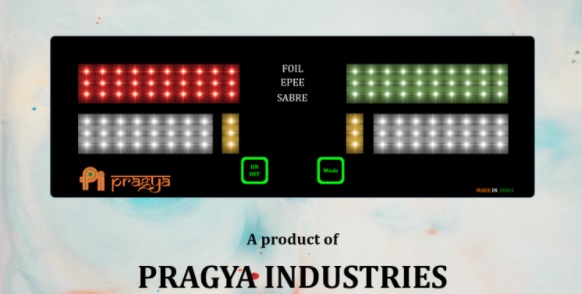 A very few companies around the globe are manufacturing the fencing scorecard apparatus, and they are located either in the USA or Europe. Indian fencing authorities/fencing clubs pay a large sum for the import of these products. Several organizations in India attempted to manufacture the fencing scorecard apparatus, however, were not able to match the standards formulated by the Fédération Internationale d’Escrime (FIE).

According to the rules of FIE, the scoring apparatus should recognize the touch of the sabre on the opponent’s lame within 0.1 milliseconds (1/10000th of a second). It is impossible to notice the hit by our eyes.

To tackle this issue, On 19 June 2020, Pragya Industries, headquartered in Haryana, India introduced a fencing scorecard apparatus called MK – 01. Pragya Industries, an initiative under Make in India, is a sports equipment manufacturer, majorly fencing. Their motto is to make the nation self-reliant in the matter of sports equipment and manufacture such high-on performance and functionality products.

MK – 01 meets the standards formulated by the FIE allowing fencing clubs in India to play all three weapons (Epee, Foil and Sabre) on the same machine. The purchase cost of MK – 01 is low since, it was introduced under the ‘Atmanirbhar Bharat’, meaning Self Reliant India, making it easy for the fencing clubs, centres, associations and schools to purchase the product.

Pragya Industries is focusing on supporting the Indian government to prepare our fencers for the Olympics 2028. Furthermore, Pragya Industries is planning to launch MK – 02 and other products including spools, wireless fencing devices and many more before Diwali festival. The company will soon initiate the process of raising first round of investments for the expansion of their product line.