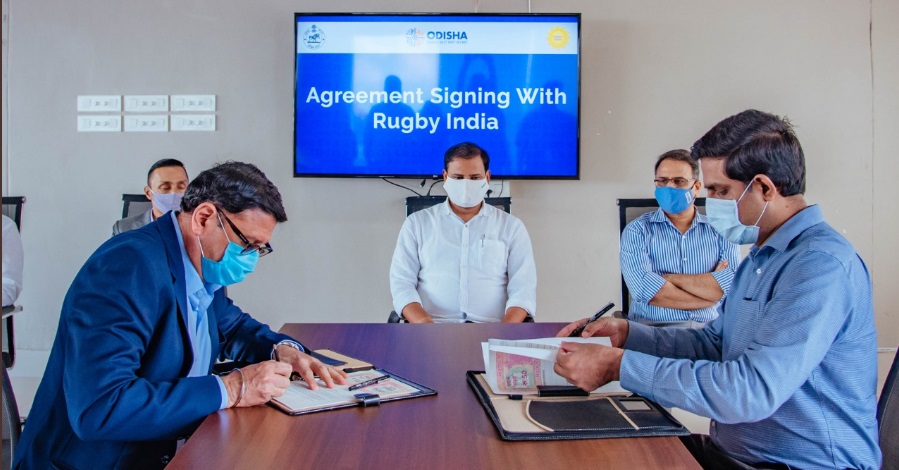 The Sponsorship will be extended towards training, conditioning and incentivizing the Indian national rugby teams (men & women) participating in international rugby events. Speaking on the occasion, Sports Minister, Shri Behera, highlighted, “This is a significant partnership for us. In recent years, we have seen a steady rise of Rugby in terms of popularity and participation, particularly the participation of young players due to the commendable efforts of Rugby India. And this partnership between Govt. of Odisha and Rugby India will not only help develop the sport of rugby further in Odisha and India, but also support and strengthen the high performance training of Indian National Rugby Teams. “ Odisha, which has produced some famous names in Indian Rugby, has been promoting Rugby amongst other sports disciplines. “This association is a natural fit since our core objective aligns perfectly with promotion of the sport, which is already gaining grounds in several States.

We hope this initiative will help nurture young talent, create a pathway from grassroots to elite and produce more players who can bring laurels to the country” he said.Rugby India President, Mr Maneck Unwala said “We thank the Government of Odishawith special mention to the Department of Sports & Youth Services (DSYS) for theircontinued support. On behalf of Rugby India, I am pleased to welcome them as AssociateSponsors of the Indian National Rugby teams. I am confident that the shared core valuesand vision of Odisha and Rugby India will ensure that this partnership thrives and isbeneficial for our rugby athletes.”He further added “The Odisha Government is dedicatedly working towards their vision of’Sports, a priority for Odisha’, by developing the state as a hub for major sporting events andcreating international standard high-performance training centres in multiple sports for thecountry

“Commenting on the occasion, Mr Rahul Bose said “This is a historic day for Indian Rugby.Thanks to this sponsorship from the Govt of Odisha, national rugby players (women andmen) will, for the first time ever, be paid for their services to the Indian rugby teams. Thismarks a first, solid step towards making rugby a professional sport in the country. I ameternally grateful to the Sport and Youth Services department, Government of Odisha, forwhat they have done for not only rugby but sport as a whole in our country. They have beenone of the most proactive, diligent and excellence-focused state sports departments in India.Their vision of holistically developing sport is unparalleled and I salute their efforts inputting India on the global sporting map. Today we celebrate the long-standing partnershipwe have with Odisha as we pave the way for a bright future for our athletes.”This association with Rugby India is expected to further build the brand image of Odisha which has emerged as an important cog in the National Sporting ecosystem in recent years.

The partnership is based on Odisha Government’s mission to develop, promote and expand the Sports ecosystem beyond Hockey and Football. After sponsoring the National Hockey teams in 2018 for a period of five years, and later supporting the ISL team -Odisha FC, State of Odisha has set another benchmark today by sponsoring the National Rugby Teams.