Impact of Covid-19 on professional sports 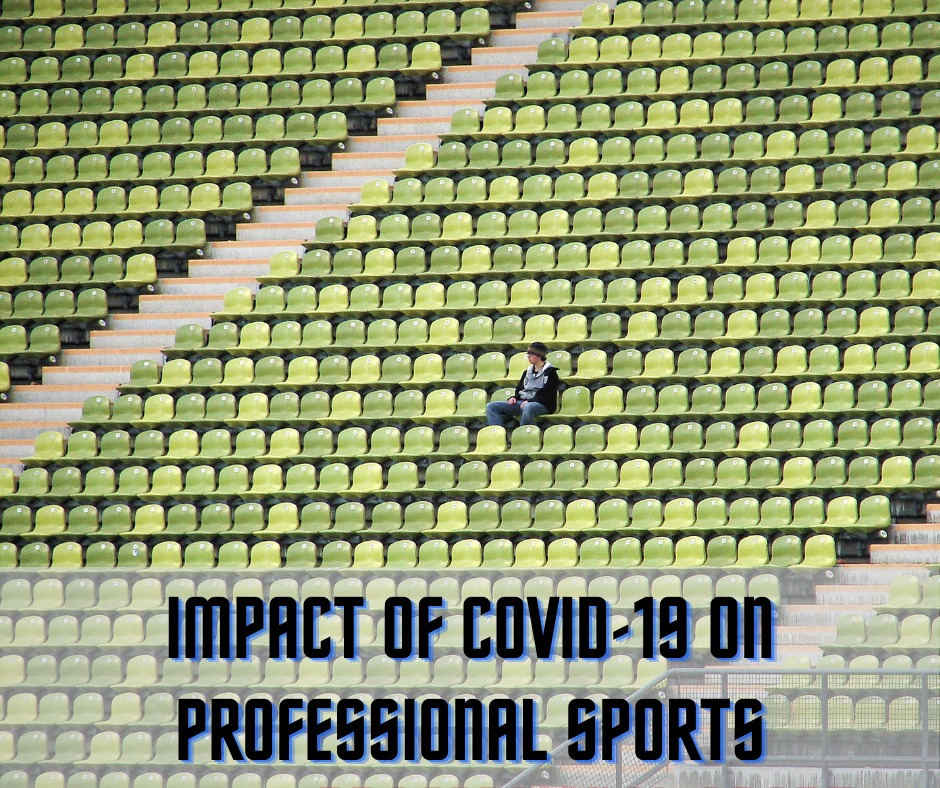 When Covid-19 struck the world in January 2020, no one could guess the impact that it would have on the entire planet. Any activity that requires in-person, physical engagement has been severely hit. Countries have had to put many things on hold; naturally, international, and national sporting events are no exception. In its 125-year-old history, the Olympics has been cancelled only three times, during World Wars I and II. Covid-19 forced the postponement of the Olympics for the first time in history. A cursory glance at the list of sporting events that have been impacted by the pandemic gives just a hint of the huge disruption to the overall sports ecosystem – events, players, organizers, sponsors and, indeed, the common man who follows these events.

● The much-awaited Tokyo Olympics 2020 postponed by a year to 2021 ● The 36th Indian National Games, which was scheduled for Oct-Nov 2020 has been postponed to the following year

● After nearly all major tournaments being cancelled in the year, the Danisa Denmark Open 2020 (a Super 750 event by HSBC BWF) is being held in Oct 2020.

● The International Cricket Council (ICC) announced that the ICC Men’s T20 World Cup 2020 has been postponed to 2022 while the 2021 edition of the event, scheduled in India, should take place as planned or that’s what the organizers feel today.

● All Ranji Trophy matches for the season have been suspended

● Wimbledon 2020 was cancelled – only the second time in its 133 year-old history. ● All domestic tennis tournaments were cancelled by AITA

● Cologne Boxing World Cup 2020 scheduled from 17-20 June was cancelled ● Season 8 of the Pro-Kabbadi League is postponed since it is a highly contact sport. ● 2020 Ice Hockey World Championship is cancelled

● 8 Grand Prix races (including Canadian, Dutch, Spanish) were postponed or cancelled this year

● Major marathons around the world (London, Boston, Paris, Mumbai) have been postponed

Even those tournaments which are being held are currently being played in a watered-down version behind the doors, with no/few spectators such as the Indian Premier League or the French Open. Further, in most tournaments, players have had no opportunity to practice or stay fit, as most of the sporting facilities are out of bounds due to the various lockdown regulations enforced by local governments and statutory bodies. There is no clarity and no timelines for when this will change. With the inevitable cuts in budgets and sponsorships for sports across the globe, never has the future of sportspersons looked so bleak and uncertain.

How has Covid-19 impacted sports and all the participants in its ecosystem – both from a financial and health and well-being angle?

Financial impact of Covid-19 on Sports

Like almost every industry and economy, sports as an industry has been severely hit by Covid-19. Billions of dollars of revenues have been wiped out in 2020. Smaller leagues and sports federations are reeling under the financial stress and some may need to file for bankruptcy. Most leagues and sports boards have cut player and coach salaries and many roles have been made permanently redundant. It is estimated that the slowdown will impact not only the present but even future revenues over the next 3-5 years. Let’s take a quick look at some aspects of this in real terms:

● The British sports industry will see a £700Mn shortfall in revenues this year ● The total loss of revenue in the USA pro sports is to the tune of $12 Bn, of which NFL alone will see a shortfall of $ 4Bn in 2020-21

● The European Club Association (ECA) for football predicts a loss of €3.6 Bn ● Most IPL Franchises have seen 40% lower sponsorships and deals this year ● The $300 Mn sports equipment industry in Jalandhar will see a 30-40% degrowth this year

● As per the sports survey conducted by Price Waterhouse Coopers in 2020, the global sports industry will grow at just 3.3% over the next 5 years, compared to an annual growth of 8% over the last 5 years – effectively, a huge de-growth.

Most countries have been under full or partial lockdown for a good part of 2020. This has had a direct impact on the health and fitness of sports professionals. Further, it has led to significant mental wellness issues amongst athletes. KL Rahul, valued member of the Indian national cricket team and captain of the Kings XI cricket franchise, spoke of the self-doubt that he had around his performance before the IPL season. Many of the younger sportspersons now require a lot of fitness training to get back to their A-game after being out of action for many months. Many deal with issues like poor diet, lack of access to coaching and funds and stipends drying up. These are significantly compounded for those living in smaller towns or rural areas.

In May 2020, the International Olympic Committee (IOC) conducted a survey, which revealed that managing mental health and sports careers, as well as diet and nutritional aspects, were the biggest challenges faced by athletes during the unprecedented time of Covid-19.

As per another survey conducted by the Sports Bulletin Journal, a majority of the athletes have expressed anxiety and concern around the quality of preparation, fear of contracting the corona-virus and uncertainty about the future. Even those athletes who have resumed playing have had to deal with various issues despite the bio-secure “bubbles” that were set up. Many cricket players (Pakistan team, Chennai Super Kings franchise) got infected by the virus during their tours. Other athletes have reported feeling depressed and lonely in their bio-secure bubbles prior to or during the tournaments.

Digital tools have brought some respite for the players. Many digital fitness apps have helped the athletes to stay fit while diet planners and guided meditation tools have been valuable. But they are hardly a replacement for those used to real life action and as the world starts unlocking, sportspersons will have to turn to professional therapists and coaches to overcome the demons in their head.

As the world starts to unlock, some sports events have started coming up on the calendar. Most countries have come up with very detailed sports unlock guidelines. These will help organizers, officials and players to resume sports in a safe, secure and systematic manner.

The US Open tennis went ahead as per schedule while the French Open tennis also made a delayed comeback. Many of the F1 races continue as per plan. French Open was the first international sports event to allow spectators to come into the sporting Arena post the outbreak of Covid-19. For Indian sports lovers, the IPL brought the much-needed respite even though the venue was shifted to the Middle-East and the ISL will go ahead in Goa behind closed doors.

Many Indian sports leagues and teams will start seeing action soon, both at the international, national and local levels:

Domestic Cricket: Although the BCCI has given the nod for India’s tour of Australia later this year, communication is awaited from BCCI on the exact status of Ranji Trophy, Duleep Trophy, Vijay Hazare Trophy, Syed Mustaq Ali trophy and others.

Football: The 7th edition of the ISL, the top premier football league, will be held in Goa at three venues from November 2020. The I-League, the country’s 2nd-tier competition, has been scheduled from December 2020 in Kolkata.

Badminton: With Thomas and Uber cups postponed by the BWF, the BAI cancelled the National badminton camp which was scheduled in September 2020. Indian professional shuttlers are training on their own and some are gearing up for the Denmark Open (Oct 2020).

Swimming: With the Government giving the green signal to open swimming pools for the training of athletes from 15th October 2020, the SFI plans to hold a national camp for elite swimmers. It has also chalked out a plan to host the junior nationals in Bangalore post Diwali.

Olympic preparation: The SAI had allowed athletes selected for the Olympics to start training from June 2020. Now it has put in place Standard Operating Procedures (SOPs) at their National Centres of Excellence (NCOEs) for the safe return of other probable athletes from 9 other sports disciplines as well as for para-athletes bound for Tokyo.

Running Events: With strict restrictions on mass-gatherings, there is no immediate hope for runners to run a marathon in India. They are keeping their passion alive through virtual marathons being conducted worldwide.

Khelo India 2021: Host state Haryana has decided that the Khelo India Youth games 2021 will be conducted after the Tokyo Olympics 2021.

With the Govt. of India giving the go-ahead to schools and colleges to reopen from 15th October 2020, sports at academic institutions will also make a comeback. However, schools and coaching centres will need to follow strict guidelines

All authorities have to play a key role to ensure social distancing and other safety norms are always followed as “un-lockdown” is cautiously implemented in sports. This includes but is not limited to all non-playing support staff having to wear masks at all times, players and

non-players having to sanitize their hands regularly and a host of other measures. If any player shows any symptoms of covid-19, they will not be allowed to be a part of even the practice sessions till they are medically cleared.

While Covid-19 has brought the sporting world to a screeching halt, it’s now time to slowly reopen the sporting arenas for athletes and even fans. It’s important for all participants of the ecosystem to actively work towards resuming sports in a safe and a sustainable way.

Ankit Nagori is the co-founder of Cure.fit, a health and fitness start-up company based out of Bangalore. Before his entrepreneur stint he was the Chief Business Officer at Flipkart. He is passionate about sports and a avid follower of Cricket