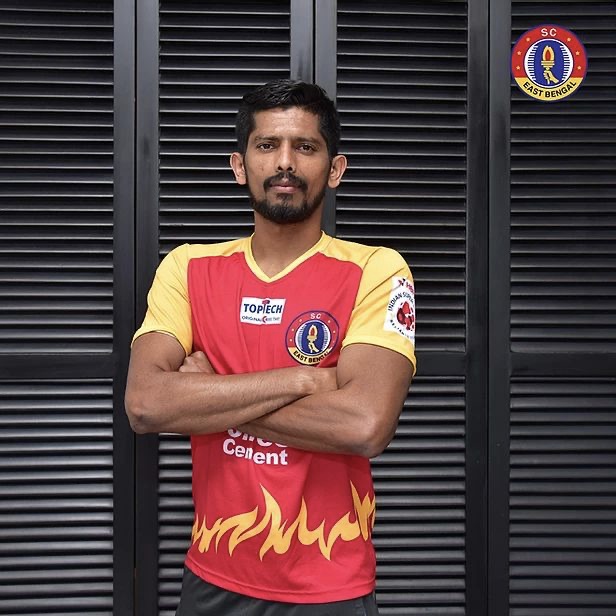 The 30 year old defender from Mumbai rejoins SC East Bengal After 5 years. He is an Indian footballer who plays as a defender for SC East Bengal in the Indian Super League. Gaikwad primarily plays as a centre back, but can also play as a full back and is a long throw specialist.He has a carrier which spans over 10 years.
He has represented various clubs across different divisions of Indian football. He hails from a family full of athletes His father Late Eknath Maruti Gaikwad was an international boxer who represented India in Boxing and has won the prestigious Shiv Chatrapati Award for boxing. His elder brother Neil Gaikwad is a professional football player having played for various teams for over 18 years and has been playing for air India for 14 years.

Gaikwad made his debut for the India U23 on 23 February 2011 against Myanmar’s U23s in the 2012 Olympic Qualifiers; India U23 won 2–1. He then made his senior debut for India on 21 March 2011 in the 2012 AFC Challenge Cup qualifiers against Chinese Tapei at the MBPJ Stadium in Petaling Jaya, Malaysia; India won 3–0. Gaikwad then won his first championship with India on 11 December 2011 when he helped India beat Afghanistan in the 2011 SAFF Cup. Gaikwad then went on to lead India to win the 2012 Nehru Cup when India managed to beat Cameroon’s B team on 2 September 2012 at the Nehru Stadium in the Indian capital, Delhi.

He has represented the national side 23 times having also represented the likes of Pallani Arrows, East Bengal, Mumbai City, Mohun Bagan, FC Goa, Mumbai City FC, Jamshedpur FC and Kerala Blasters.
Raju had a dream return to the side and the SC East Bengal Coach Robbie Fowler commented on the same by saying “ He played like a man who did not want to get beaten and that’s what we like about him. But, for now, he has set himself a standard. So, he has to live up to it and I am confident that he will do that”
SC East Bengal registered their first win of the season after the inclusion of Gaikwad into their side