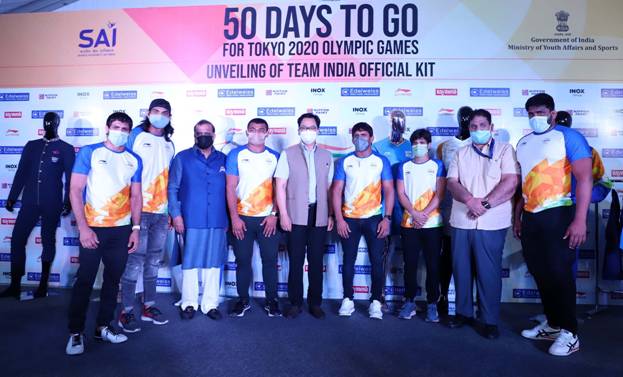 With 46 days to go for the Tokyo 2020 Olympic Games, the Indian Olympic Association unveiled an impressive ceremonial and official sports attire for the Indian contingent that will participate in the Games of the XXXII Olympiad scheduled to be held from 23 July to 8 August 2021 in Tokyo, Japan.

Gracing the ceremony as the Chief guest, Union Minister for Youth Affairs and Sports, Sh. Kiren Rijiju said, “We are just 46 days away from the Tokyo Olympic Games. Now every day, every second counts. The launch of the official kit of the Indian Olympic team is an important aspect and it is very significant that it is being launched on this day. I am happy to say that our athletes are well prepared for the biggest sporting event and as our Prime Minister has said, the entire country must rally behind our athletes so that they are motivated to give their best at Tokyo. I urge every Indian to cheer for the Indian squad.”

Mr. Rashesh Shah, Chairman & CEO, Edelweiss Group said, “Olympics stand for endurance, excellence, long-haul training and hard work, values that strongly resonate with us at Edelweiss. As the world tackles an unprecedented pandemic challenge, the Tokyo Olympics will remind us of the values of resilience, perseverance and compassion in a whole new way. We are honoured and privileged to be able to support India’s Olympic dream with IOA and look forward to the Indian contingent scaling new heights in Tokyo”

Edelweiss is the Principal Sponsor, Inox Group is the Entertainment partner and Nippon Paint is associate sponsor of IOA for the Tokyo Olympic Games. Celebrated Bollywood Playback singer and composer, Mohit Chauhan closed the evening on a fantastic note as he presented an awe-inspiring Olympic theme song, dedicated to the Indian athletes heading to the greatest sporting spectacle on earth, the Tokyo 2020 Olympic Games.