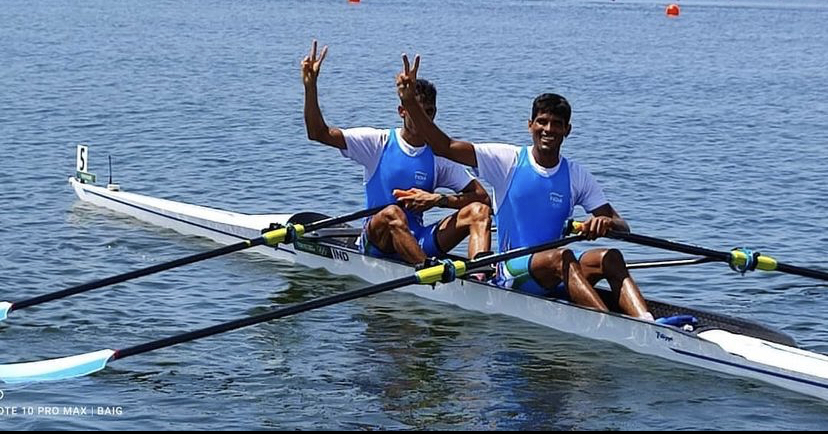 On 25th July 2021, a day after Mirabai Chanu’s historic performance brought in India’s first medal at the Tokyo 2020 Summer Olympics, the Sea Forest Waterway witnessed a new achievement as the Indian duo of Arvind Singh and Arjun Lal Jat entered the semi-finals in the Lightweight Men Double Sculls Event in rowing. Qualifying consecutively since the year 2000, Indian rowing saw its best ever performance at the Olympic games, securing a guaranteed spot in the top 12 and a race to take this position even higher scheduled for the 28th.

The team qualified earlier this year at the Asian & Oceania Qualification Regatta, coming in second place after Uzbekistan. Their Olympic performance was an example to many, as they beat the very team from Uzbekistan in their repechage race at Tokyo to secure a place in the semi-finals of the event. The previous best performance in the sport was seen at the 2016 Rio Olympics where Dattu Bhokanal finished 13th in the Men’s Single Scull event.

The Lightweight Men’s Double Sculls event has always been one where India has provided significant participation. Rowed over a distance of 2000 metres with two rowers having two oars each, the event requires both men to weigh below 72.5 kg each, with a team average not exceeding 70 kg. A strenuous and taxing sport, rowing demands stamina, endurance, and strength along with impeccable coordination. Singh and Jat have been rowing together for almost four years now, having participated in the Asian Games 2018, Asian Rowing Championships and more. Hailing from small towns in Rajasthan and Uttar Pradesh, the two were introduced to the sport after entering the Army and quickly picked up the sport with commendable performances at national and international championships.

With its first rowing club established as early as 1858, India has always been actively involved with the sport and its progress in the country, creating Asian champions and Olympians that have proved formidable opponents for many. Major centres of rowing in the country are found in Pune, Kolkata, and Chennai along with Sports Authority of India centres in Kerala, Odisha, and Port Blair. Important to mention is the international standard channel at the Army Rowing Node in Pune, home to many champions including Jat and Singh. Under the leadership of President Smt. Rajlaxmi Singh Deo and guidance from the national coach Mr. Ismail Baig, the Rowing Federation of India oversees major development in the sport, hosting national championships at the senior, junior, sub-junior, and under-12 divisions, identifying talent at early stages and creating athletes that take the sport to new heights.

Initially popular only in cities with significant rowing bases, such as Kolkata and Chennai, the sport slowly displays efforts worthy of national praise as the Asian Games in 2016 saw the Indian Men’s Quadruple Sculls take the Gold medal, coupled with a bronze medal in the Lightweight Men’s Double Sculls. India has also been a significant performer at the junior and senior Asian championships for both rowing and indoor rowing (based on a machine called an ergometer). The sport has ideally been dominated by the armed forces, with almost all Olympians hailing from the army. Current developments through initiatives of the federation and government have led to various other states like Madhya Pradesh, Odisha, Punjab and more becoming centres supplying promising talent that could potentially sport Indian colours. Held over an excruciating distance of two kilometres, athletes require constant training for months and years at end to perform their best in a race that typically lasts around seven to eight minutes.

The sport has mainly seen dominance of western nations at the international stage, with Italy, New Zealand, Netherlands, and Germany heading the Greatest Sporting Nations list for rowing. Notable and commendable, is China’s 8th position on the list along with its recent wins at the World Rowing Championships. These indicate a new era in Asian rowing as various Asian countries, including India, display promising progress in the sport. With considerable progress and many wins, it is safe to say that Asia is now creating a significant impact on the sport at the international stage.

The Rowing Federation of India has played a key role in the sport reaching new heights in the country. Secretary General M.V. Sriram believes that the steady improvement in India’s Olympic performance is a result of constant hard work, scientific training, a proper diet and planned rest/recovery. Athletes at national rowing camps are constantly trained along these lines and taught the importance of these aspects. With its popularity on the rise, he believes India’s current performance at the Olympics will trigger an increased interest and enthusiasm to know more about the sport.

Important to note however, is the fact that India has never qualified for the Olympics in a women’s rowing event. Indian women have won laurels at various championships such as the Asian Games, Asian Rowing Championships and more. The recent highlight in women’s rowing was a Gold medal in the Junior Women’s Coxless Four at the Asian Junior Rowing Championships in 2018. In the Tokyo 2020 Olympics, women have taken centre stage with their performance in multiple sports. When asked about the future of women’s rowing in India, Mr. Sriram said “We are trying for more women to participate. Unfortunately we don’t get the right talent to break the glass ceiling and win the qualification races in India to make the grade to field them in the Olympic qualifier”.  Nevertheless, promising performance has been a constant with the Indian Rowing teams, junior women have fared well in the past few years with women being identified and inducted into programs such as the Target Olympic Podium Scheme (TOPS) Athlete Program for the 2024 and 2028 Olympic Games. Sustained efforts resulting progress at this pace could lead to India witnessing female participation in rowing at the Olympics.

As the world enters a new normal due to the covid-19 pandemic, Indian rowing has been quick to adapt, safely hosting multiple state championships and national camps in the past year. With a dedicated set of officials, members and athletes, rowing seems to be a sport that is on the rise both in terms of popularity and performance. This feat at the Olympic Games not only marks a turning point in the country’s history of the sport, but also forms the sign of a promising future.

The author, Swara Popat, is a second year law student at Jindal Global Law School and a former national medallist at the Junior and Subjunior National Rowing Championships, having represented West Bengal in seven national championships. She has also been state champion in the women’s fours event and a part of national rowing camps.–
Swara Popat