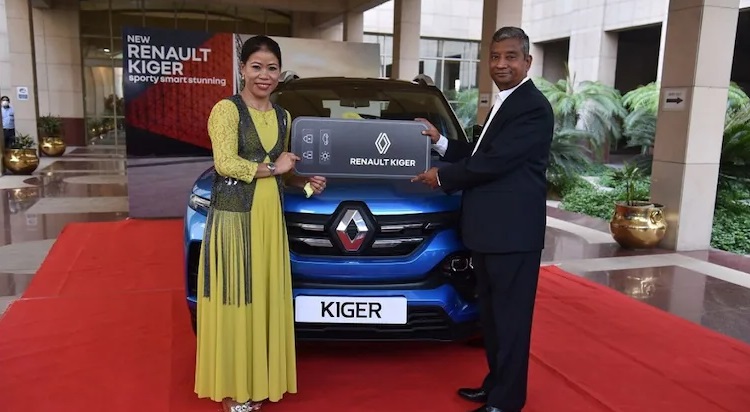 enault presented the Renault Kiger compact SUV to the Boxer and Tokyo Olympics 2020 flag-bearer Mangte Chungneijang Mary Kom. MC Mary Kom is the third woman athlete, after Shiny Wilson and Anju Bobby George, to be India’s flag-bearer at the Olympics. Veteran boxer Mary Kom has always made the country proud, be it inside or outside the boxing ring, said a company statement. Earlier, the French carmaker presented the Kiger compact SUV to weightlifter and Tokyo Olympics 2020 silver medalist Saikhom Mirabai Chanu for her stunning performance on the world stage and making every Indian proud of her feat.

The Renault Kiger is a sub-four metre compact SUV designed and developed for India. It is loaded with several attributes and is powered by a sporty turbocharged 1.0-litre petrol engine. The design of the Renault Kiger is accentuated by a host of muscular elements which make the Kiger stand out in a crowd. On the inside, the Kiger sports a smart cabin combined with the latest technology, functionality and ample space.

Renault India is celebrating its ten years of operations in India. As part of the tenth anniversary celebration, Renault India launched the all-new RXT (O) variant of the Renault Kiger. Together with its product portfolio expansion strategy to drive volumes in India, Renault is substantially increasing its network reach in India and introducing several unique and pioneering initiatives to ensure that customers have an unparalleled association with the Renault brand. Currently, Renault India has more than 500 sales and service touchpoints in India, which include 200+ Workshop On Wheels locations across the country.