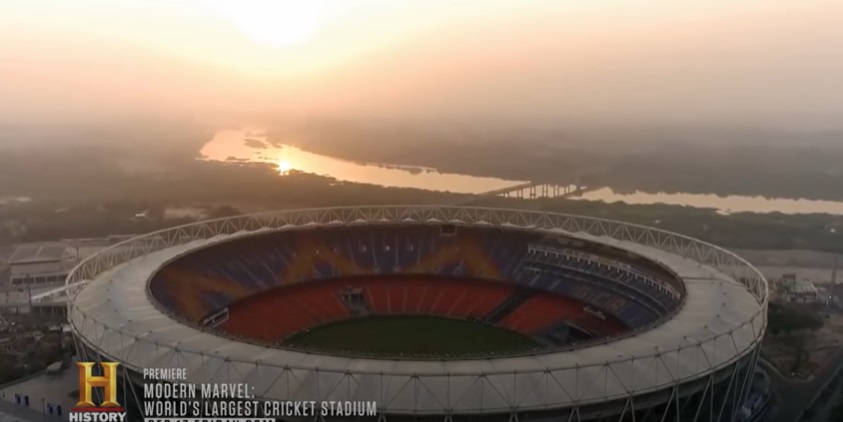 World’s Largest Cricket Stadium’, premiering on the 17th of September at 9 PM, is the amazing story of building cricket’s largest arena on the historic Motera ground in Gujarat’s Ahmedabad. The brand new Narendra Modi Stadium, inaugurated by the President of India earlier this year, seats as many as 1,32,000 spectators. This makes it the world’s largest cricket stadium by seating capacity, surpassing the Melbourne Cricket Ground (MCG) in Australia. It was rebuilt at a cost of ₹ 800 crores in just 38 months. Now, HistoryTV18 presents an in-depth documentary on this massive feat of design and engineering – constructing a futuristic stadium that is purpose-built for the modern-day game. Filmed on location in 4K and high-definition, the documentary reveals never-seen-before aspects of the logistics, architecture, and planning that go into building a sporting venue of this scale while presenting jaw-dropping facts bound to fascinate viewers. The film also features cricketing luminaries, such as Sunil Gavaskar, Kapil Dev and Ravi Shastri, and cricketers Virat Kohli and Rohit Sharma. Viewers will also get insights and interesting details from BCCI Hon. Secretary, Jay Shah as well as former Indian cricketers Gautam Gambhir, Parthiv Patel.

‘Modern Marvel: World’s Largest Cricket Stadium’ will not just enthrall viewers with astonishing facts and figures about the newest landmark in the world of cricket. It also features India’s cricketing superstars reminiscing about historic moments in Indian cricket and career milestones that were reached on the old Motera pitch. Ravi Shastri speaks about playing the first test match ever on this ground against the West Indies in 1983. While ‘Haryana Hurricane’ and India’s World Cup-winning Captain, Kapil Dev talks about Sunil Gavaskar became the first cricketer in the history of the game to reach 10,000 runs in Test cricket. All this and more happened at Motera. “It was a big thing for us to celebrate… a cricketer from our generation made 10,000 runs, so it was massive!” says Kapil Dev. While Gautam Gambhir remembers playing a tough World Cup quarter-final against Australia in 2011, Parthiv Patel recollects that Kapil Dev had also broken a record right here in Motera surpassing Richard Hadlee to become Test cricket’s highest wicket-taker with 432 scalps. BCCI Hon. Secretary Jay Shah reminds viewers that it was also here that Bharat Ratna Sachin Tendulkar had scored his maiden double century in Test cricket.

And now, upon this hallowed ground has risen Ahmedabad’s glittering new edifice, a modern marvel of design and engineering and a fitting ode to a sport that has given billions of people and generations of Indians, some of their most cherished memories. HistoryTV18’s ‘Modern Marvel: World’s Largest Cricket Stadium’ chronicles the construction of this newest landmark of India’s favorite sport. The new stadium is twice the size of Eden Gardens in Kolkata, and four times larger than the historic Lord’s in London. The Narendra Modi Stadium has been built by Larsen & Toubro (L&T), which is also credited with constructing some of the country’s most iconic landmarks, including the world’s tallest statue. The sheer scale and complexity of the Gujarat Cricket Association’s grand project also meant bringing in design architects from Australia, roofing experts from the US, specialized canopy fabric from Japan, cables from Italy, and revolutionary LED stadium lighting from Spain. With attention to detail and revealing interviews with the people behind this mega build, HistoryTV18’s documentary provides a fast-paced and compelling narrative of the vision and construction with gob-smacking facts that make the stadium a true marvel

The program is the latest in HistoryTV18’s offering of originals that tell engaging and entertaining stories of India that are relevant, informative, and have best-in-class production values. ‘Modern Marvel: World’s Largest Cricket Stadium’, premieres on the 17th of September at 9 PM exclusively on HistoryTV18 and HistoryTV18 HD. Speaking about the film, BCCI Hon. Secretary Jay Shah said, “The Narendra Modi Stadium is one of the great Modern Marvels of the 21st century. HistoryTV18 has showcased cricket’s largest arena in a manner befitting its scale and grandeur.”

Avinash Kaul, MD A+E Networks | TV18, says, “At HistoryTV18, we believe in the power of great storytelling. Our teams work hard to bring compelling stories to life, creating content that’s differentiated, visually spectacular, and relevant for our viewers. The Narendra Modi Stadium is a tribute to the nation’s love for cricket and an icon of rising India. We’re proud to have had the opportunity to tell this remarkable story and I’m sure our viewers will enjoy it immensely.”

Watch ‘Modern Marvel: World’s Largest Cricket Stadium’ on the 17th of September at 9 PM, only on HistoryTV18 and HistoryTV18 HD