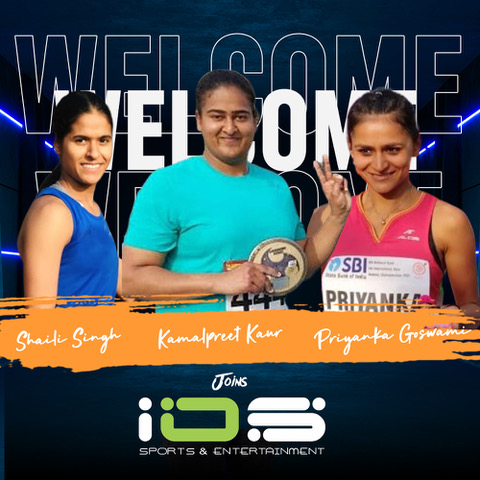 IOS Sports and Entertainment Pvt. Ltd. – one of India’s leading sports management organizations, today announced the signing of India’s Discus Diva Kamalpreet Kaur, as part of a troika of talented Athletes to get into their vast and impressive roster. Kamalpreet, who stood sixth in the Tokyo 2020 Olympics and is the only Indian woman to breach the 65m mark, was joined by rising star Shaili Singh, silver medalist long jumper at theU20 Athletic Worlds and Olympian race walker Priyanka Goswami, to partner with IOS for all marketing related aspects of their sporting careers.

Kamalpreet who hails from Punjab, made the finals of her first Olympics earlier in Tokyo, impressive one and all with her technique and power.

“As an athlete its always very important to have an uncompromised focus on your training while other aspects of a professional athlete’s career also need a specialized focus. To manage that you not only need experience but trustworthy team and I couldn’t think of anyone better than IOS Sports & Entertainment for that role, given their specialized focus and track record,” said Kamalpreet Kaur post getting into an agreement with IOS Sports & Entertainment as her commercial agents.

Priyanka Goswami on her association with IOS said.  “An athlete at various instances faces a lot of stress due to commercial aspects in their career and that directly affect their performance on many occasions. That’s something I did not want to happen to me and I am happy to get on board the best in this business, IOS Sports & entertainment, who are known for the expertise in managing the commercial aspects for Olympic sports and athletes”

Shaili Singh, who also has joined IOS Sports & Entertainment, trains under the able guidance of Indian long jump legend Anju Bobby George and her husband Robert Bobby George recently caught the eye of the nation with her Silver Medal winning performance at the World Athletics U20 Championship 2021.

Apart from international glory the long jumper holds national records in multiple age categories in the national circuit which includes U20, U18 and U16 categories. To add to her credit, she has been a gold medalist both in the age group category of U20 in the national championships as well as at the Senior Women Championship held earlier in 2021.

Speaking about the development Shaili’s Coach Robert Bobby George said, “Shaili is a talent par excellence and when IOS approached we knew that she will be well taken care of. While being good at one’s sport is a given, it is also important to have the right partners to help the athlete scale newer heights when it comes building an overall profile and presenting oneself at the world stage.

Shaili’s mentor and ace long jumper Anju Bobby George also added, “The times have changed now and with partners like IOS who have committed themselves to raising the bar for Olympic athletes, I am pretty sure Shaili can only concentrate on getting better at her sport and rest of the things will just fall in place.”, she said

Mr. Rahul Trehan, COO, IOS Sports and Entertainment Pvt. Ltd said, “We have been committed towards the growth of Indian Olympic sports and our history speaks volumes about our commitment. Kamalpreet, Shaili and Priyanka have been in our eyes for long and we are glad to have them on board now. Our commitment has always been to allow an athlete concentrate on their performance and training while we take care of all the financial ammunition they need. Talents like Shaili are the future of Indian Athletics while Kamalpreet and Priyanka are strong contenders at top level and such talents should be nurtured, protected and provided with all the necessary support that they need and we intend to do exactly the same.”