Documentary film ‘Shane’, all set for a spin on India’s BookMyShow Stream 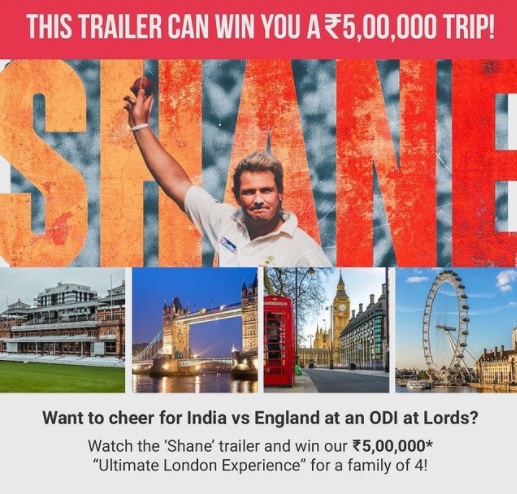 BookMyShow Stream, India’s largest homegrown Transaction Video-on-Demand (TVOD) streaming platform, is all set to spin yet another winning title adding to its spectacular, handpicked catalogue with ‘Shane’, the much-awaited documentary film on international cricketing legend Shane Warne. Based on the life of the former captain of the Australian cricket team and amongst the greatest bowlers the game has witnessed, the documentary ‘Shane’ will be exclusively available on BookMyShow Stream from January 15th, 2022 for Indian fans!

Speaking on the release of the documentary film, Shane Keith Warne, Former Captain of the Australian cricket team and international commentator said, “I’m super excited to be releasing my documentary ‘Shane’ which will be exclusively available on BookMyShow Stream. In the film, I will talk all about my career, including the highs, like taking the Rajasthan Royals to win the inaugural IPL, way back in 2008 as well as interviews from some cool people who have been part of my journey and those whom I consider very close friends including Sachin Tendulkar, Manoj Badale, owner of the Rajasthan Royals, Ed Sheeran as well as one of my closest friends Chris Martin. I am very excited to share my story through “Shane” with all my fans in India.”

Commenting on the launch of the exceptional life story through ‘Shane’ the documentary film, Ashish Saksena, COO – Cinemas, BookMyShow said, “Cricket and Movies are the love languages for India and Indians. As fans of the magnificent game of cricket and the movies, it is an absolute privilege for us at BookMyShow Stream, to bring Indian audiences closer to discovering the life of a legendary player like Shane Warne through the documentary “Shane”. Warne has been an iconic name in the international cricketing arena, known for leading his team to victory in the very first year of the Indian Premier League and winning momentous victories for the Australian cricket team. The anecdotes he shares about his life and career in the film, will give his fans a first-hand account of his cricketing journey through the years. Through the exciting campaign to make the film even bigger than what it is, BookMyShow Stream is excited to offer some lucky Indian cricket fans a chance to witness the magic live on-ground at the Lord’s in London as also the T20 World Cup 2022 in Australia.”

Lucky fans of the game can get more than just an incredible story by watching the ‘Shane’ trailer and standing a chance to win an experience of a lifetime to watch India play England at the legendary Lord’s Cricket Ground in London, mid year with a maximum prize value of ₹5,00,000.

Fans who rent or buy ‘Shane’ on BookMyShow Stream stand a chance to also win a second prize of a fantastic trip to Australia to watch a T20 World Cup match in Sydney, later in 2022 with the maximum prize value pegged at ₹5,00,000. Fans could rent ‘Shane’ for 5 chances or buy ‘Shane’ for 10 chances to win.