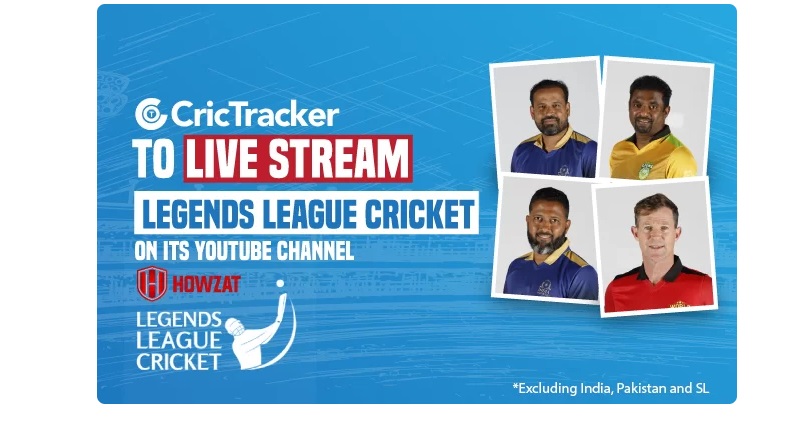 Legendary cricketers from across the world will turn back the clock in the inaugural edition of Legends League Cricket from January 20. The organisers have successfully managed to bring some of the top retired cricket players under one roof and have divided them in three teams India Maharajas, Asia Lions and World Giants.

As many as seven matches will be played over the course of next 10 days at Al Amerat Cricket Ground in Muscat, Oman. CricTracker is delighted to announce that all the matches will be live streamed on its Youtube channel. The live streaming of all the games will be available in all countries except from India, Sri Lanka and Pakistan.

CricTracker’s Youtube channel boasts of around 260k subscribers and the fans across the world will get to witness the legendary cricketers take them on a nostalgic ride of the early 2000s.

As for the teams, India Maharajas will be led by Virender Sehwag who will be missing the first two matches. In his absence, Mohammad Kaif will lead a star-studded side while Asia Lions comprises the cricketers from Pakistan, Sri Lanka and Afghanistan. Former Pakistan captain and head coach Misbah-ul-Haq will lead the Lions.

Two-time T20 World Cup winning captain Daren Sammy will lead the World Giants, the team that boasts of players like Kevin Pietersen, Herschelle Gibbs, Daniel Vettori and many others. CricTracker is also the Digital Live scoring partner of Legends Cricket League and fans can follow live updates on the website.

CricTracker CEO/Founder Syed Sujjad, was delighted to associate with LLC and said, “This association will help the live action reach the fans across the world who will get to witness legendary cricketers turning back the clock and all the battles. Looking forward to having a great partnership with LLC.”