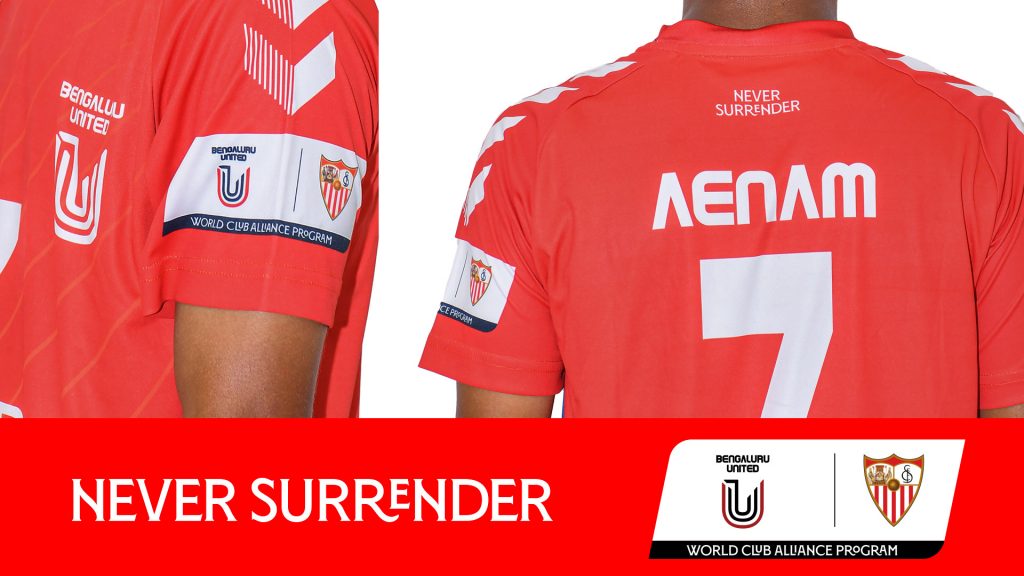 Reigning two-time BDFA Super Division champions FC Bengaluru United (FCBU) have unveiled their new home and away jerseys for the ongoing season. The design and colour are inspired by the cultural heritage of Karnataka as well as the state’s rich sporting history. They also pay homage to Sevilla FC, their international partners since 2021, drawing from their iconic red and white shades as well as incorporating their slogan ‘Never Surrender.’

The home shirt is bathed in red: a colour that represents passion, power, energy and vitality, and is also linked to Karnataka and the Bangalore Football Stadium. The away shirt, in white and similar to Sevilla’s home kit, features a Kasauti design, a traditional form of embroidery popular in this part of India. Both shirts proudly display Sevilla FC’s motto ‘Never Surrender’ as well as the World Alliance Program logo. The partnership between the two clubs revolves around a five-year agreement, which focuses on technological innovation, development and sporting projects, as well as expanding Sevilla FC’s presence in one of the world’s major emerging football markets. The partnership was recognised at the prestigious World Football Summit Awards, where both clubs received the award for Best Internationalisation Strategy in September 2021.


The “Never Surrender” spirit championed by Sevilla FC is also something shared by FC Bengaluru United. It is driven by the belief that aiming high, overcoming obstacles and going your own way when it comes to achieving set goals is the path to success, both on and off the pitch. On seeing the FCBU kits, president José Castro said: “Sevilla FC is proud that our partner in India has adopted the red and white colours, which represent us, on their shirts this season. To pass on our ‘Never Surrender’ attitude to them shows our presence in the country, where we hope to make a name for ourselves in the world of football.”


FC Bengaluru United’s owner, Gaurav Manchanda, said: “Our new kit captures the essence of football and Karnataka. The design combines the best of the state’s footballing and cultural traditions while seamlessly bringing in the iconic red and white colours and the inspiring motto of Sevilla FC.”